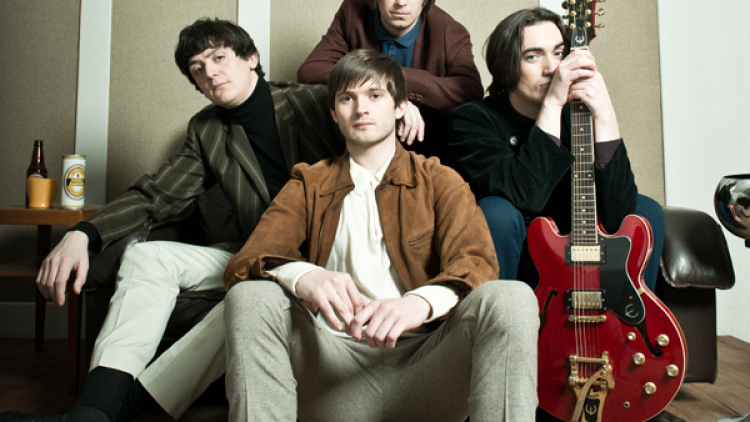 Hampstead Theatre brings the talents of an exciting young cast to Sunny Afternoon, the story of the early life of Ray Davies and the rise to stardom of The Kinks. Featuring some of The Kinks’ best loved songs, including You Really Got Me, Waterloo Sunset and Lola, and with choreographer Adam Cooper joining the creative team, Sunny Afternoon marks the 50th Anniversary year of the band’s debut release.

July 30, 1966, as Bobby Moore lifts the world-cup trophy, a hundred thousand fans in Wembley are singing SUNNY AFTERNOON in unison; the number one hit which rocked the nation that summer. But how did that happen? And how did The Kinks end up not only invading America but also being banned from playing there at the height of their career?

Ray Davies’ story is told with Music and Lyrics by Ray Davies, a new book by Joe Penhall, directed by Edward Hall and with a radical new design by Miriam Buether. Musical Director is Elliot Ware, lighting is by Rick Fisher and sound by Matt Mckenzie.

Set against the back-drop of a Britain caught mid-swing between the conservative 50s and riotous 60s, this production explores the euphoric highs and agonising lows of one of Britain’s most iconic bands and the irresistible music that influenced generations.

Ray Davies is an influential and prolific rock musician and was co-founder and lead singer and songwriter for rock band The Kinks and later a solo artist. He has an outstanding catalogue of hits from the earliest 1960s to the present day with estimated record sales in excess of 50 million. He has also acted, directed and produced shows for theatre and television.

Joe Penhall is an award winning playwright and screenwriter. Plays include Some Voices (Royal Court), Blue/Orange (National Theatre and West End), winner of Best New Play at the Evening Standard Awards, Olivier Awards and at the Critics Circle, and Dumb Show, Haunted Child and Birthday (all Royal Court). Screenplays include Enduring Love and The Road.

Adam Cooper is one of the UK’s leading dancers and choreographers. Having been a principle in the Royal Ballet and danced the lead in Matthew Bourne’s multi-award winning Swan Lake, he has choreographed On Your Toes, (Leicester Haymarket, Royal Festival Hall, Japanese tour); Singin’ In The Rain (Sadler’s Wells, Leicester Haymarket); Grand Hotel (Donmar Warehouse); and Carousel, (UK Tour, Savoy Theatre) amongst others. He choreographed and co-directed Les Liaisons Dangereuses (Japanese tour and Sadler’s Wells, London) and Simply Cinderella (Curve Theatre, Leicester).

John Dagleish (Ray Davies) was last on stage in Out of Joint’s The Mother. Film appearances include The Monuments Men, Snow in Paradise and Age of Heroes. TV includes Lark Rise to Candleford (3 series), Beaver Falls (2 series), Starlings (2 series) and Henry V, The Hollow Crown.

Ned Derrington (Pete Quaife) is a recent RADA graduate. He has appeared in many RADA productions. On TV he has acted in Siblings, Fresh Meat, Holby City and Midsomer Murders.