A Human Being Died That Night: ★★★★ from Guardian 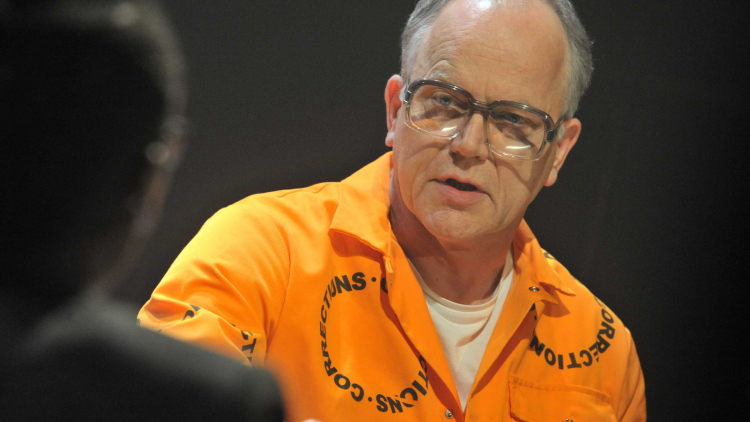 A Human Being Died That Night – a scorching look at apartheid guilt
By Lyn Gardner, Guardian

There is a moment near the start of Nicholas Wright’s play, based on the book by South African psychologist Pumla Gobodo-Madikizela, who spent several years interviewing Eugene de Kock, when Silence of the Lambs is invoked.

Gobodo-Madikizela has gone to visit De Kock, who was a paid assassin for the apartheid regime, and is now serving two life sentences plus 212 years for his “crimes against humanity”. He is dressed in an orange jumpsuit and chained by his feet to the floor. She is on a chair with wheels and has been given instructions on how to wheel back speedily in case he tries to attack her. “Doesn’t it make you think of a certain film with Jodie Foster and Anthony Hopkins,” he inquires. Is he toying with her? Or just trying to break the ice?

Wright’s play, which gets scorching, vivid performances from Noma Dumezweni as Gobodo-Madikizela and Matthew Marsh as South Africa’s most reviled man, cleverly excavates the natural drama of the situation, in which a white Afrikaner man and a black African woman face each other across a table. This is not just two people. It is the old South Africa and the new South Africa. It is a test of them both, and of the limits – or not – of forgiveness and empathy. The future of South Africa, or indeed any society living with the aftermath of repressive violence – might just depend on it.

The title is, of course, ambiguous. De Kock doesn’t just murder others: with each pull of the trigger and blast of a bomb, he murders a part of himself and the small boy with a stutter who he once was long ago.

There is genuine dramatic tension in the proceedings, neatly exploited by Jonathan Munby’s production, which begins as if at a conference and then physically moves the audience so we feel what it’s like to enter the confining, barred space of a prison cell. There are constant questions, too: is De Kock merely playing Gobodo-Madikizela in the hope she may be able to help get his sentence reduced? Does guilt really manifest itself in washing or has he just studied Lady Macbeth? Does De Kock deserve sympathy because he was treated far more harshly than many of his colleagues who now walk free? Does reconciliation always follow on from repentance?

De Kock’s absent victims seem to fill the theatre like ghosts. It’s hard to watch, not least because in our hearts we all know, as Gobodo-Madikizela knows, that there are no monsters in this world, only other human beings just like us.