Wonderland: ★★★★ from The Independent 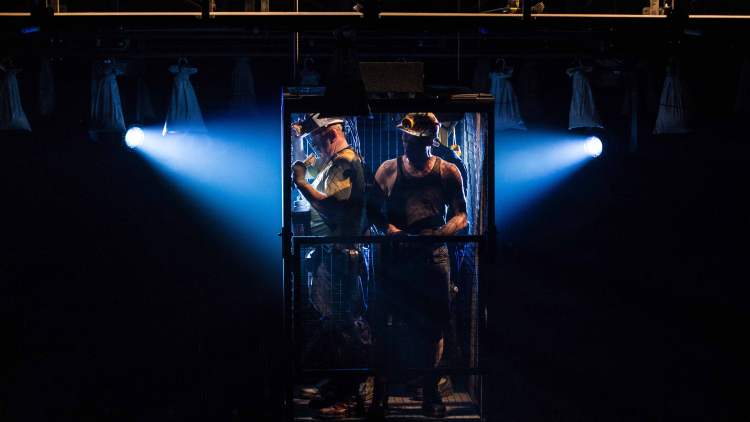 This powerful play about the 1984-85 miners’ strike and the profound cultural change that Thatcher’s defeat of the NUM betokened comes with the endorsement of David Hare. He is quoted in the publicity as saying that “*Beth Steel*, in a commanding Main Stage debut, illuminates corners of a story you think you know but don’t”.

I would add that, in this piece, the 30 year old Steel, whose father is Nottinghamshire miner, also honours Shelley’s principle that art should help us to “imagine that which we know”.

For Edward Hall’s exceptionally involving – and, by the end, emotionally devastating – production, Hampstead Theatre has been reconfigured in the round with a spectacular environmental set from Ashley Martin-Davis that’s dominated by a mighty pit shaft and a cage lift. You feel as though you have been plunged down to the coal face. We follow two 16 year old lads (Ben-Ryan Davies and David Moorst) as they start on their first day in this Midlands mine and are gradually initiated into a subterranean world of sweat-lathered men grafting in Y-fronts, bawdy humour, explosions, collapsing roofs, communal singing, pride in family tradition, and the close cameraderie that’s vital in such dangerous work. Steel portrays this with gritty wit, strong sentiment (as opposed to sentimentality) and a poetic wonder at the vastness of geological time.

In alternate scenes featuring Peter Walker, Nicholas Ridley and the National Coal Board’s American chairman, Ian MacGregor, we see monetarism poised to bring the miners’ way of life to an end. The Thatcher government, determined to avenge the victories of 1972 and 1974, plans for a strike over pit closures and Arthur Scargill duly leads the NUM into the trap. These sworn ideological enemies and the two main protagonists in the struggle are off-stage presences in Steel’s play. An oddly potent strategy, but it allows the piece to be slightly evasive over Scargill. The damaging effects of his failure to call a ballot and the hefty price paid for his refusal to compromise are registered without being sufficiently dwelt on. We hear the recorded voice of Thatcher at the (IRA-bombed) 1984 party conference inveighing against the NUM as the enemies of democracy.

Staged by Hall with masterly control of the canvas and a large, brilliant all-male ensemble, the second half shows how the bunch of miners we’ve come to know (headed by Paul Brennen’s fiercely proud foreman) start to splinter under the conflicting pressures and bitter hardship of the year long strike. With Dugald Bruce-Lockhart as the right-wing dandy maverick, David Hart, on tour sowing seeds of dissent and with the police reinforced in the set-piece battles by undercover elements, the opposition has the decided advantage.

The final section of the play is almost too painful to watch. You come to realise that Steel is locating in this symbolic moment of defeat the start of the steady erosion of workers’ rights that has resulted in the current culture of zero-hour contracts.

So on the thirtieth anniversary of the strike, this very moving play is timely in more ways than one.