Wonderland: ★★★★ from The Telegraph 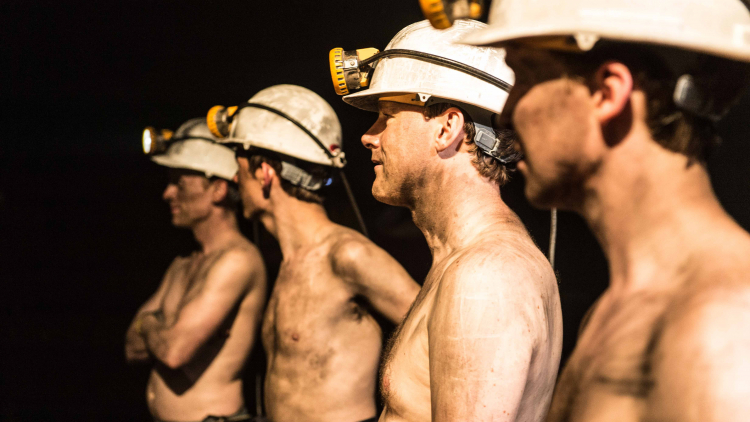 Hampstead is on a roll. Its superb musical, Sunny Afternoon, depicting the story of that much-loved British band the Kinks transfers to the West End in the autumn and it is now fielding this gripping, darkly comic and often moving play about the miners’ strike in which Mrs Thatcher took on Arthur Scargill.

It is, of course, territory that has already been covered in that fine film and stage musical Billy Elliot. But this play by Beth Steel, the daughter of a Nottinghamshire miner, takes us down into the pit itself in Edward Hall’s superb production with a spectacular triple-decker set by Ashley Martin-Davis. There is a scene when part of the roof collapses and a miner is injured that is astonishingly powerful and moving.

The action is set in the Midlands, where two raw 16-year-olds are introduced to the harsh working life of miners by the tough but humane pit deputy, known as Colonel because of his power of command and his splendid bright red moustache. But they have barely started work before the strike is called and the long battle that transformed industrial relations in Britain begins.

Rather bravely, Steel keeps both Mrs Thatcher and Arthur Scargill offstage, perhaps because they would have taken over the play and their background presence is in any case constantly felt. But we do meet the “wet” Energy Secretary Peter Walker and that arch Thatcherite Nicholas Ridley, along with Coal Board chairman Ian MacGregor and the maverick David Hart, who attempted to persuade miners to go back to work even though it meant braving picket lines and being called scabs.

Reaction to the play will inevitably be dominated by the politics of audience members. Having lived through the Seventies and the three-day week, the miners’ strike has always seemed to me to be a battle that had to be fought and won by Mrs Thatcher’s Government. That doesn’t prevent me, however, from sympathising with the miners’ desperate fight to save their jobs and communities.

The verve and humanity of the piece are never in doubt and Hall’s gripping production often achieves great dramatic power.

Indeed with its miners’ songs and generous heart, the piece often reminded me of Bill Bryden’s great ensemble productions at the National Theatre.

There are some superb performances. Paul Brennan is deeply touching as the tough pit deputy who insists that the men on his watch look out for each other, and his speech about the dignity of hard labour, and the pride he takes in it, provides the emotional heart of the play.

David Moorst is deeply touching as the raw new recruit with a wife and baby, driven to despair when he can’t support his family. The moment when he describes killing his dog because he can’t afford to feed it is profoundly upsetting, and so, too, is the scene when we see the desperate miners scrabbling for coal on a spoil-tip to heat their homes.

The battle of Orgreave seems a bit underpopulated, but the rancour between the miners and the police, the latter goading the pitmen with all the overtime money they are making, powerfully captures the bitterness of the long dispute.

This is a play and a production of rare power and theatrical flair and one this crusty old Tory recommends wholeheartedly.