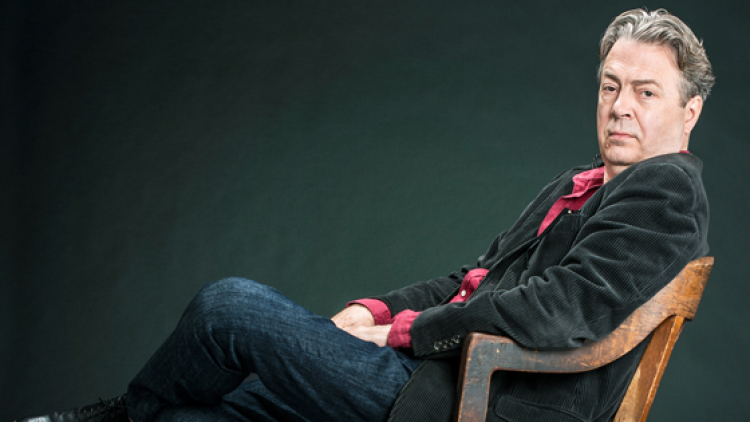 Four aspiring young writers have paid big bucks to seek wisdom at the feet of the caustic Leonard – once a celebrated novelist, now a cantankerous editor, teacher and grandstanding chronicler of third-world war zones…

The full cast will be Roger Allam as Leonard, with Bryan Dick, Rebecca Grant, Oliver Hembrough and Charity Wakefield hoping to find the secret of success.

Under Leonard’s brilliant but brutally unorthodox tuition, competition for his approval is intense and the students clash. Alliances are made and broken – in and out of bed, tactical schemes are hatched – how far are they willing to go to make it to the top? Pulitzer Prize nominee Theresa Rebeck’s mordant comedy is a cocktail of ambition, power and lust – with an unexpected kick.

Seminar played on Broadway from November 2011 to May 2012, where Leonard was played by Alan Rickman and then Jeff Goldblum.

Theresa Rebeck is a widely produced American author. Her play The Water’s Edge was produced at the Arcola in 2009. Work seen in New York includes Dead Accounts (Music Box Theatre), Mauritius in a Manhattan Theater Club Production, The Scene, The Water’s Edge, Loose Knit, The Family of Mann and Spike Heels at Second Stage, The Understudy by the Roundabout Theatre Company and View of the Dome at New York Theatre Workshop. TV credits include the hit series Smash.

Terry Johnson returns to Hampstead Theatre following his critically acclaimed Hysteria last year starring Antony Sher. In the last two years at Hampstead he has directed the hits Race by David Mamet and Old Money starring Maureen Lipman. Earlier work for Hampstead includes The Memory of Water, Cracked and Dead Funny. Other theatre work includes Oh What a Lovely War (Stratford East), and numerous West End and Broadway shows including The Duck House, the Tony Award winning La Cage Aux Folles, One Flew over the Cuckoo’s Nest and his stage adaptation of The Graduate.

Roger Allam last appeared at Hampstead Theatre in 2007 in The Giant by Antony Sher, directed by Greg Doran. He worked with Terry Johnson in La Cage Aux Folles in the West End. Other recent theatre includes The Tempest and Henry IV Parts I & II for which he won the 2011 Olivier Award for Best Actor (Globe) and Uncle Vanya (Chichester Festival Theatre). Films include Girls Night Out, The Book Thief, The Iron Lady, The Woman In Black, The Queen and Tamara Drewe for which he won the Peter Sellers Award for Comedy, Evening Standard Film Awards 2011. TV includes_ Endeavour I & II_, The Politician’s Husband, Parade’s End and Game Of Thrones.

Bryan Dick’s stage appearances include Public Enemy and Kursk (Young Vic), and The Alchemist and The Life of Galileo (National Theatre). TV includes Wolf Hall, The Ice Cream Girls, Being Human and Ashes to Ashes. Film work includes I, Anna, Day of the Flowers and Master and Commander.

Rebecca Grant has appeared on stage in Wah Wah Girls (Kneehigh), The Mahabharata (Old Vic) and One Flew Over The Cuckoo’s Nest. TV includes Holby City (series regular), Prisoners’ Wives, Other People and The Way We Live Now. Film includes The Judas Curse, The Other Boleyn Girl and 91/2 Inches.

Charity Wakefield appeared at Hampstead in The Blackest Black earlier this year. She has also been seen on stage in The Cherry Orchard (National Theatre), No Naughty Bits (Hampstead) and The Circle (Chichester). TV includes Mockingbird Lane and Any Human Heart. Film includes Day of the Flowers, Serena and The Raven.

Lighting is by Howard Harrison