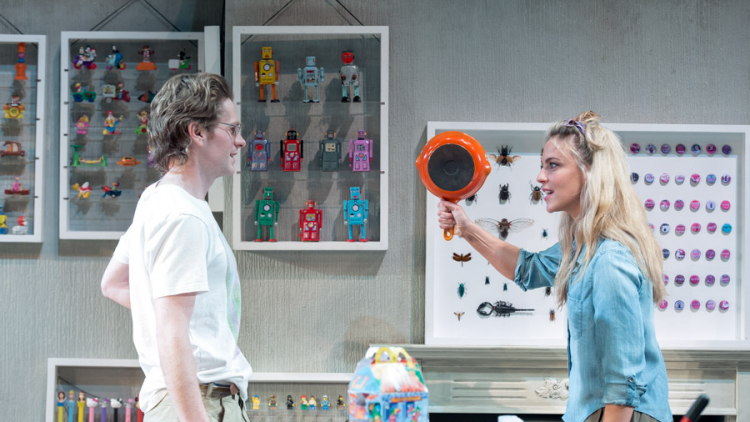 At a time when theatre strives to tell evermore innovative and epic stories, there’s something brave in a play about the well-worn subject of love – especially when its scope is limited to the first and last hour of an unremarkable couple’s relationship. But Hello/Goodbye, which has transferred to Hampstead’s main stage after a sell-out run in the downstairs theatre last year proves that, in the right hands, a tale of ordinary love can be utterly compelling.

The play’s first half sees Alex (Endeavour’s Shaun Evans), an introverted amateur collector who “likes things ordered and alphabetised and preferably laminated”, and Juliet (Miranda Raison), an impetuous whirlwind of a woman, moving into a flat they each think they’re renting alone. It may sound like the start of a tired rom-com but Peter Souter’s script is fresh, funny and well observed (Juliet’s admission that the fluffy handcuffs she bought to save a relationship now serve as her bike lock were met with guffaws of recognition). Throw in Tamara Harvey’s energetic direction, and the next hour of verbal sparring and mounting lust is a delight.

Evans wisely steers clear of playing the geek, instead imbuing Alex with quiet charisma and an astute wit. Raison pulls off a neat trick in making Juliet both infuriatingly selfish and totally irresistible, although her histrionics at times seem crude next to Evans’s more nuanced performance. Nevertheless, their chemistry is palpable and the journey through the stages of their attraction a seamless joyride.

But it is the second half of this play that will win you over. Set ten years later, as the couple leaves the home they shared, Souter’s masterful script fills the stage with that special strain of heartache reserved for amicable break-ups. There are sparks of long-held resentment softened by moments of deep fondness; casual bickering; bittersweet memories we are invited to wallow in; and private jokes that are never quite explained.

Lucy Osborne’s evocative design cleverly illustrates the heartbreak, transforming the flat from a grotty but warm home stuffed with the promise of unopened boxes, to a cold shell, littered with the detritus of a once happy relationship.

Raison and Evans, who one could almost believe had conducted a ten-year relationship during the interval, become even more captivating, dancing dazedly between their conflicting emotions. And a special mention must go to Bathsheba Piepe, who makes a charming professional debut as the sweetly naïve Amanda, a mystery woman embroiled in the relationship’s apparent swansong.

I won’t reveal where (or whether) their dance ends, but I will say this: a play that can swell and break your heart within two hours is far from ordinary.