‘Three years ago the doomsayers were predicting the end. Financial apocalypse. But the system survived. Because the system works. Time to take advantage of the goodies on offer…’

Hampstead Theatre presents the world premiere of Beth Steel’s Labyrinth, a Hampstead Theatre commission. Directed by Anna Ledwich, this compelling new thriller explores the fallout from one the most catastrophic economic crises of modern history, which brought Latin America to its knees for decades.

Sean Delaney plays John. Sean returns to Hampstead Theatre where he made his professional stage debut in Rabbit Hole earlier this year after graduating from RADA in 2015.  His credits whilst at RADA include Measure for Measure, Mrs Warren’s Profession, New Labour, Stasiland, Chicken Soup with Barley, Mephisto and Twelfth Night. His television credits include Midsomer Murders.

Philip Bird plays Frank. His theatre credits include Sunny Afternoon (Harold Pinter Theatre/Hampstead Theatre), The Potsdam Quartet (Jermyn Street Theatre), Wild Oats (Bristol Old Vic), The Cherry Orchard (Royal Lyceum), Sweet Panic (Duke of York’s Theatre), The Marriage of Figaro (Watermill Theatre), The Merry Wives of Windsor, As You Like It, The Winter’s Tale, Troilus and Cressida (Shakespeare’s Globe). His film and television credits include Midsomer Murders, Emmerdale, EastEnders and his film credits include Blessed and In the Dark.

Matt Whitchurch plays Phil. Matt trained at RADA and his recent theatre credits include The Herbal Bed (English Touring Theatre), Pine (Hampstead Theatre), We Know Where You Live (Finborough Theatre) and A Midsummer Night’s Dream (Liverpool Everyman). His television credits include The Outcast, Call the Midwife and Some Girls.

Abubakar Salim trained at LAMDA. His theatre credits include The Winter's Tale (Cheek By Jowl), Teddy Ferrara (Donmar Warehouse), Sense of an Ending (Theatre 503) and Prince of Denmark (National Theatre). His television credits include Black Mirror, Agatha Raisin 'The Potted Gardener', Spotless, 24: Live Another Day and The Jury.

Elena Saurel plays Grace. Elena studied acting at The Lee Strasberg Institute in New York and her theatre credits include Pearl (The Abrons Arts Centre, New York). Her recent television credits include Benidorm, Not Safe For Work and Catastrophe. Her film credits include Charlie and Wendy.

Beth Steel returns to Hampstead following the critically acclaimed Wonderland which opened in June 2014. Wonderland won her the Charles Wintour Award for Most Promising New Playwright at the Evening Standard Awards that same year and was a finalist for the Susan Smith Blackburn Prize, an award for best play in the English language by a female playwright. Beth’s debut play Ditch was shortlisted for the John Whiting Award and premiered at the HighTide Festival before transferring to the Old Vic Tunnels.

Anna Ledwich makes her Hampstead Theatre Main Stage debut following Donny’s Brain, The Argument and the Olivier Award nominated Four Minutes Twelve Seconds Downstairs. Her other credits include The Stick House (Raucous Collective/Bristol Old Vic) and Lulu (Gate Theatre/Headlong) for which she received the New Directions Award. She was awarded the Michael and Morvern Heller Director's Bursary at Chichester Festival and is an Associate Director at Theatre 503 and co-Artistic Director of Theatre on the Fly at Chichester Festival Theatre.

Labyrinth has been made possible by the generous support of Lin and Ken Craig, who are proud to continue their association with Beth Steel at Hampstead Theatre. 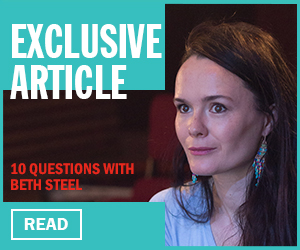