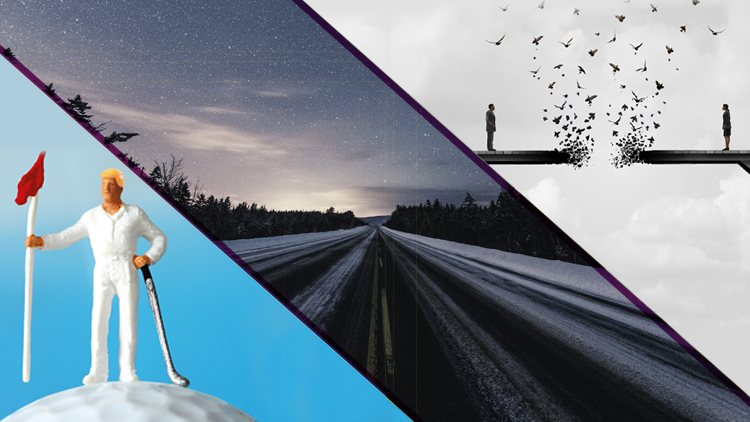 Winner of the 2018 Pulitzer Prize for Drama, Martyna Majok’s Cost of Living receives its highly anticipated UK Premiere at Hampstead Theatre – making it the 100th premiere since Edward Hall and Greg Ripley-Duggan took charge in 2010.

Martyna Majok’s exquisitely original, honest and deftly funny new play explores our need to connect and be loved regardless of the gulfs that disability, race, class, and wealth place between us.

John, a wealthy, brilliant, and successful PhD student with cerebral palsy, hires Jess, a recent graduate who has fallen on hard times, as his new carer.  Across town, truck driver Eddie attempts to support and re-engage with his estranged wife, Ani, following a terrible accident that has left her quadriplegic. As four very different lives collide and entwine, roles are unapologetically flipped, reversed and exposed - who is actually caring for whom?

‘It’s perfect, isn't it? The most perfect spot I think I’ve ever seen… An unspoiled, natural beauty. Which makes it utterly ripe for development…’

Hampstead Theatre presents the world premiere of Hannah Patterson’s Eden. Directed by Matthew Xia, Eden is inspired by real events and is a modern-day David and Goliath drama about the importance of fighting for what’s right – whatever the outcome.

Eden is an idyllic coastal village of astonishing beauty, and home to an active community who are eager to protect it at all costs. Even the infamous Aaron Chase, an American property tycoon intent on building a luxury golf course, can’t name a price they’ll accept. But his star employee Sophie, a former Eden resident, might be able to broker a deal, so Chase plans to exploit her invaluable connections and local knowledge. Forced to confront her past, will Sophie be content to act as Chase Enterprises’ bulldozer or will deeper loyalties come to the fore?

Hannah Patterson returns to Hampstead Downstairs after the two successful productions Platinum and Giving. Her play Playing With Grown Ups was nominated for an Off West End Award for Best New Play and transferred to 59E59 in New York as part of the Brits Off Broadway Festival. Having participated in a residency with Paines Plough, she has written for and performed as part of the company’s Come to Where I’m From series. As a writer for film, she is currently working on an adaptation of her play Much with Tilt Films and two features for the BFI. She has been invited to participate with projects on the Edinburgh International Film Festival Talent Lab, London Film Festival’s Think-Shoot-Distribute, Creative England’s Net.work and the LA CineStory Screenwriting Lab. Hannah is currently on the Headlong Headstart writer’s programme and the UK film industry’s leading mentoring scheme Guiding Lights, under the guidance of David Hare.

Hampstead Theatre presents the world premiere of Kellie Smith’s breakthrough play Wilderness. This searing exploration of unconditional love and of the personal sacrifices it demands will be directed by Anna Ledwich.

Having both been deeply scarred by their own parents’ separations, Joe and Anne never imagined they’d find themselves, years later, in the same position. Determined to place the interests of their son Alistair at the centre of their lives apart, they split with the firm objective of maintaining amicable relations at all costs. But a sudden change in circumstance triggers a chain of events that pushes their best intentions to the limit… Before they know it, they are both teetering dangerously close to the edge of an abyss.

Kellie Smith writes for theatre, film and radio and is currently developing ideas for TV. Her short films To Know Him and The Big Day have both been BIFA nominated and To Know Him was also nominated for a Royal Television Award. She has been shortlisted for the Bruntwood Prize and Channel Four playwright in residence at the Royal Exchange Theatre. Previously produced work for theatre includes Black Gold (Royal Exchange Studio); The Sum of Parts (Liverpool Everyman) and Blackout (The Dukes Theatre, Lancaster). Her play The Monstrum was part of NT Connections and she has written other plays for young people including The Lost Things, which won Theatre Centre’s ‘Skylines Showcase’. Kellie has written three afternoon plays for BBC Radio Four, the most recent being The Archivist.

Anna Ledwich began her directing career at Theatre503. She was awarded the Michael and Morvern Heller Director’s Bursary at Chichester Festival Theatre and was co-Artistic Director of Theatre on the Fly for Chichester’s 50th Anniversary Celebrations. Anna received the Gate Theatre/Headlong New Directions Award for her adaptation of Frank Wedekind’s Lulu and was nominated for the 2015 Olivier Award for Outstanding Achievement in an Affiliate Theatre for Four Minutes Twelve Seconds at Hampstead Downstairs and the 2018 Olivier Award for Best Comedy for Dry Powder at Hampstead Theatre. Recent work includes Cookies (Theatre Royal Haymarket); Dry Powder and Labyrinth (Hampstead Theatre); Acceptance; No One Will Tell Me How to Start a Revolution; The Argument; Deluge; Donny’s Brain and The Empty Quarter (all Hampstead Downstairs); Kiss Me and Four Minutes Twelve Seconds (both Hampstead Downstairs/West End); The Stick House (Raucous Collective/Bristol Old Vic); Blue Remembered Hills and A Christmas Carol  (both Chichester Festival Theatre); Dream Story (Gate) and How Does A Snake Shed Its Skin (Summerhall/National Theatre Studio). Anna’s adaptation of Beauty and the Beast premiered at Chichester Festival Theatre in 2017.

Casting for Cost of Living, Eden and Wilderness will be announced in due course.

Next year is Hampstead Theatre’s 60th Birthday and in this landmark year the theatre plans to extend its auditorium with the addition of 41 new seats. This additional capacity increases the number of tickets available each year by 11,500 and is created in response to the high demand for much of Hampstead Theatre’s programme and will also help support its future financial sustainability. The project will include an overall refurbishment of the space, in which over one million people have seen a performance since the building opened in 2003. Hampstead Theatre has launched a fundraising campaign to meet the £440,000 project cost, and has raised over £100,000 to date. The theatre is appealing to its audiences who can support the 60th Birthday makeover by making donations and naming a seat.