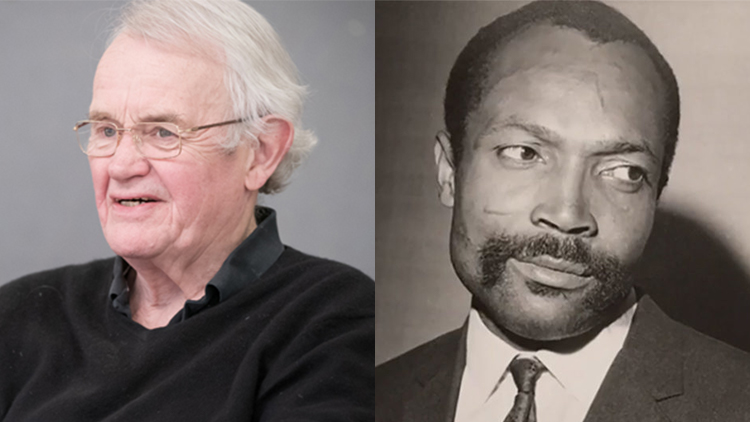 from an interview with greg ripley-duggan, executive producer at hampstead theatre

Howard Brenton: I got to know Alfred Fagon because we did a double bill together. He had written a very brilliant one act play called Four Hundred Pounds (1983) which was set around a pool table and had two characters who do not play pool, but instead argue about a debt of £400. And Roland Rees, the director who ran Foco Novo, approached me and asked me to adapt Brecht’s Conversations in Exile as a companion piece. Now, the Brecht is a very lengthy – three-hour long – dialogue between two exiles which is taking place in a railway station in Sweden. Right? Anyhow, Roland asked me to do a 50-minute version (and I don’t know how much the Brecht Estate knew about this!) to form the second part of a double bill with Alfred’s play. Both parts would be about exiles – the Brecht is a very brilliantly written discussion of the plight of the immigrant – and we would cast them both with the same two black actors. And Roland said to me “and they will play pool” which, of course, was a disaster because I don’t think either of the actors ever actually learned to play! But it was while we were doing this I got to know Alfred.

Greg Ripley-Duggan: So when did you first meet him?

HB: Oh, I think we had met before then, in fact – I had seen him on stage, of course - he was a very fine actor… But we really got to know each other better at this point because he said I needed to learn to play pool… And so he took me out on what turned out to hustling exhibitions: Alfred was a brilliant pool hustler…. and I looked like a complete ingenue! Now, at that time around Covent Garden there was a complete circle of pubs where pool was being played and money was being bet on the games. And the smart boys in the pubs would see me play with Alfred - they’d take a look at me and say – ‘aye-aye, he’s useless, here we go…’. And then, of course, Alfred would step in as my partner and sweep the board - and we would leave the pub hurriedly! We’d go on long pub crawls doing this…. Oh, he was great fun!

GRD: Did he teach you play pool in the end?

HB: Well, I wasn’t actually too bad eventually, but I reverted to something called Bar Billiards which is much easier…

GRD: And what sort of impression did he make as a man?

HB: Well, you know, you retain this physical sense of someone… And Alfred was very fit, very wiry – he had a welterweight or middleweight boxer’s body – and although he was actually quite a slight man, he radiated something truly formidable… I think it was that he had real physical confidence. He wasn’t tall, but he was imposing – and he was always very present. And there was a kind of a ‘smile’ about him – he had a way of smiling and then looking away – though, look, this is how people live on memory from decades ago…

Beneath the physicality there was something, well, spiritual about him. We really became very friendly – we’d go out drinking quite a lot – and our big subject for discussion was Paradise Lost. He very literate, he’d read his Milton, and he knew Paradise Lost really well and could quote great stretches of it. I’ve always loved the poem, so that was a big topic for discussion, a big thing between us. And through that it became clear that he believed in redemption in some way - indeed, that he believed he had himself been redeemed. I don’t know what the story was, whether it was something that happened when he was in jail or whether it had been to do with heavy drinking – in the past he had drunk very heavily and I know that by then he was doing alcohol counselling for some people – but he clearly believed in redemption. He had become a very disciplined man by this point – of course, there were still some wild nights, but his life was very disciplined. Yet he also had this paradisical, sort of hippy-ish dream of returning to his family estate in Jamaica – I never quite knew how real this was, though I found out later it was real – and we would have a great Writers’ Conference and we would get stoned out of our minds under the trees, reading our plays and reading Milton with our wives – we had to bring our wives… Of course, this never happened, sadly…

I also remember him saying – and he really shocked Roland Rees at the time – ‘what I want to do now is write a play about a good white policeman’. And I remember Roland putting his hands up to his head and saying “What on earth can you mean?” and Alfred saying “No… I really believe there could be a good white policeman!”. Well, he never got to write the play…

GRD: So the double bill went on tour? And ended up at the Royal Court?

HB: Yes, as I recall the tour was pretty successful and we ended up at the Theatre Upstairs.

GRD: And you did a joint poetry reading there?

HB: Did we? God almighty! In the Theatre Upstairs? One of those late-night post-show things? I can’t remember that. I do remember his poetry being pretty good though…

GRD: Well, we’ll have to look that one up! Did you stay in touch after the tour?

HB: Yes, of course, we kept on bumping into one another constantly – via Roland, who was very social and there were always meetings and dinners happening at his house. But then there was this awful moment when I got a call – I think from Sheelagh Rees (Roland’s wife) saying “have you seen Alfred?”. And I said I had seen him two weeks before when we’d gone out for a drink over at Camberwell Green, but not since then…  And she said, well, no-one’s seen him…

Read about what happened to Alfred Fagon in Roy Williams’ article ‘Who was Alfred Fagon?'