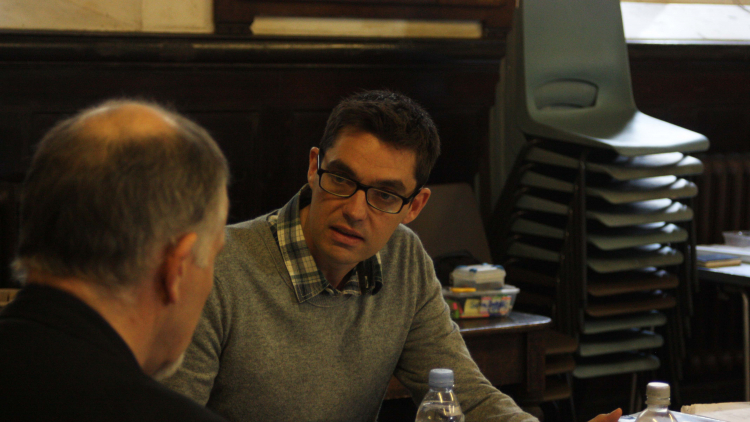 “I don’t like an audience to get too comfortable”: Director Jonathan Munby

Director Jonathan Munby speaks to The South African’s Sandi Thompson about how A Human Being Died That Night, playing at Hampstead Downstairs transcends the South African context with its extraordinary message.

British theatre director Jonathan Munby studied classical texts at Bristol University and went on to work as an assistant director at The Royal Shakespeare Company.

Munby has been dubbed a maverick by some because of his attraction to theatre that provokes debate and forces audiences, in his own words, “out of their comfort zones.”

I tracked him down to talk about A Human Being Died That Night, a South African story of huge import, currently playing at Hampstead Downstairs.

How did you get involved in this project?
The producer Eric Abraham gave me a copy of Pumla Gobodo-Madikizela’s book while I was doing my play The Number at the Fugard Theatre in Cape Town. He sensed it would make a terrific piece of theatre. I read the book and was blown away by it. Eric put me in touch with Nick Wright, who at that point had already written a draft script. I’m not South African, I’m English – that gave me a sort of objectivity, while Eric, Nick and indeed Pumla were close to the subject matter.

Did you have in mind from the start the actors who would play Eugene and Pumla?
Noma Dumezweni was on board very early on – she and I worked together in the Royal Shakespeare Company and I sensed she would understand both the heart and mind of Pumla. Noma was born in Swaziland and had some insight into the South African story. Finding someone to play Eugene de Kock was a much longer process. We needed an actor with very specific skills. When I met Matthew Marsh I didn’t realise he had played FW de Klerk in End Game. So what was interesting to discover was that he already had an investment in the South African story in some way and he had done a lot of research for his previous roles. In a sense he come to the process already entrenched in the role. He’s a fantastic stage actor, able to handle great amounts of text and brings a wonderful sense of humanity and intelligence to the role, which is what we really wanted for the role of Eugene de Kock.

How did you get the accents correct?
Dialect is an important part of identity, especially when identity becomes such a charged idea. It was important that we got authentic South African voices right from the start so I engaged a dialect coach who worked with both Noma and Matthew before rehearsals began.

How do you bring across a sense of authenticity in a play like this with a small stage and minimalist set?
This is a question I get a lot. Theatre is not documentary; it’s a different medium and it has a different relationship with an audience. Theatre is a world of metaphor; of imagination, a forum for debate. We knew instinctively that we wanted to find a small theatre so that we could have the audience as close to the action as possible, almost trapping them inside that interview room with Pumla and De Kock. It’s about the atmosphere rather than a realistic representation. I don’t like an audience to get too comfortable. Starting in the foyer of the theatre was partly to disrupt them a little bit, but also to give them a sense of the journey that Pumla makes arriving at the prison. The description of Pumla’s journey to Pretoria Prison is very vivid in the book. I talked to Pumla and I know what it was like for her to go and meet Eugene de Kock for the first time.
The set of Pretoria Central Prison in which Pumla conducts her interviews with Eugene de Kock.

Why have you premiered the play in London?
I’m based in the UK, as is Nick Wright. There are thousands of South Africans based in London. It made sense to open in London. The play will be going to Cape Town, Johannesburg and Pretoria next year. But I believe this play transcends the South African story. It has universal ideas that need to be told throughout the world; anywhere where reconciliation needs to happen. The nature of evil and the possibility of forgiveness is an extraordinary message.

What would you like the audience to take away with them?
I’d love them to leave the theatre wanting to have a conversation; I would want them to come with a willingness to be challenged and to leave hopefully wanting to ask some more questions.