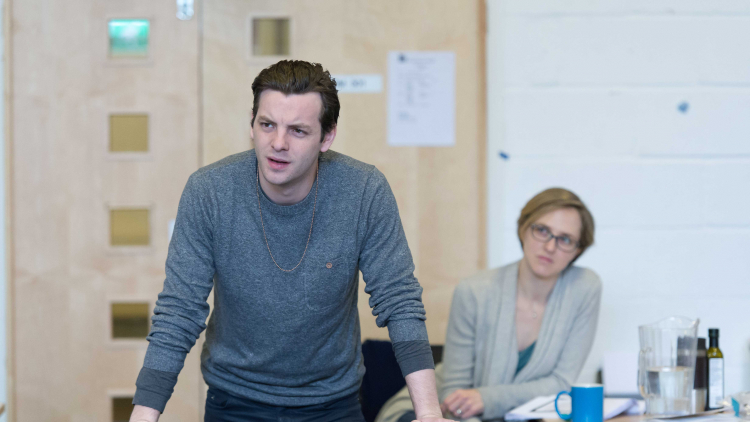 When Simon Gray was watching rehearsals in 2001 for his play Japes, he had a strong sense that the characters would have arrived at different outcomes if they had made different choices.

Experimenting with that “sliding doors” moment – and exploring the same situation from different perspectives – he wrote three more plays, all set in the same house in Hampstead’s Vale of Health.

Now for the first time they are performed together in rep at Hampstead Theatre.

Michael and Jason (Japes) have inherited the family home after the accidental death of their parents.

But their close sibling ties come under strain when they both fall in love with the same girl, Anita.

Tracing their lives back and forth over 30 years, the four-play cycle carries a risk of madness for the performers admits director Tamara Harvey.

She said: “The practicalities are mammoth. On the first day I said ‘welcome to the insanity’.

“In Japes we meet them in their early 20s and hit them at different moments – at one point in their 60s.

“We see them go through so much and make choices about how to live their lives and survive the challenges life throws at them.

“It’s an actor’s dream, as well as a nightmare, because it gives so much scope to think about how different and similar we are as we age.”

Harvey, whose biggest recent job was steering the Sir Tim Rice musical From Here to Eternity, says the location is important in setting the brothers’ bohemian middle-class context.

“It also feels symbolic, to do with recuperation, how we take care of ourselves and each other through our lives.

“Anita comes from a different world, she’s described as a bit of a waif and finds herself in this intellectual house where everyone’s quoting poetry at each other – it’s both alien and the stuff of fantasy.

“It’s that thing of meeting a family in the house they’ve grown up in and finding yourself wanting to be a part of it.

“But the house becomes both a sanctuary and a prison for her.”

At times the different stories overlap and interweave as Gray explores how different choices might lead to different paths and conclusions.

“We’ve all had those moments when we’ve wondered, what if I had made the opposite choice – what would I be now?

“He plays that out. Sometimes you get the same line in a different play with a different tense or adjective.”

Jason and Michael’s relationship is supposedly modelled on Gray’s rivalry with brother Piers, who died of alcoholism aged 49, but Harvey is uninterested in biographical facts.

“He clearly loved these characters and wanted to explore their stories, but autobiographical questions are not for the rehearsal room. It’s not something you can ever play,” she says.

Gray, who died in 2008, was famed for his self-deprecating sardonic wit and subjects that are unashamedly intellectual and unfashionably, middle-class.

But Harvey is thriving on these factors and on the craftsmanship of these late works.

“The confidence it takes to embrace the possibility that you haven’t written the definitive version is quite interesting.

“What I’m loving about his writing is the depth of what’s unspoken. What’s fascinating about these characters is they use language in the way of people who love words but it explores how intellectual arguments can be a means of not saying things that are in their hearts.”

She added: “It gives that sense of the potency and the risk of language – words can be by far the cruellest things we use against each other.”

Irrespective of class, she says the questions raised, of who we love and what we do to them, are universal.

“These plays are concerned with exploring the human condition and human beings in all their complexity and beauty, which resonates far beyond a little house in Hampstead.”