★★★★★ for DruidMurphy from The Financial Times 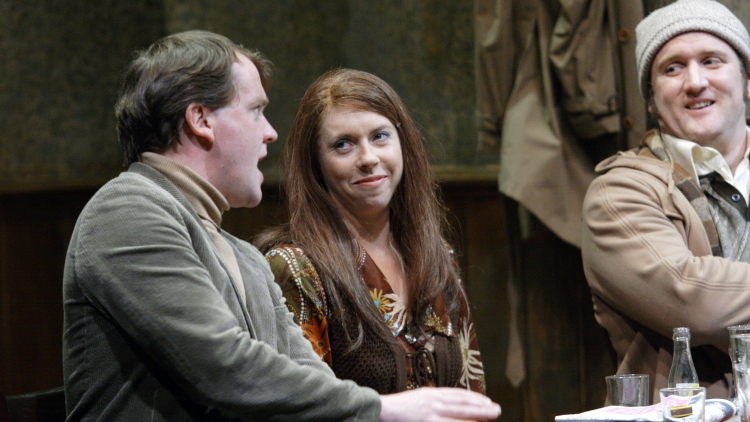 The three plays in this mini-retrospective of Tom Murphy’s work are urgent, visceral, and superbly acted

Tom Murphy once wrote, “Living in the 1960s, I found that I was a famine victim, that it wasn’t over . . . Famine to me meant twisted mentalities, poverty of love, tenderness and affection; the natural extravagance of youth wanting to bloom – to blossom – but being stalemated by a 19th-century mentality.”

DruidMurphy is a touring mini-retrospective of the Irish playwright’s work, performed by Galway’s Druid theatre company. It comprises three plays, written between 1961 and 1985, that are linked by themes of emigration – or, more precisely, emigration prompted by famine, progenitor of hopelessness and humiliation, source of a trauma that isn’t “over”. Drama lies in the attempts to cope with abject conditions of living – physical, psychological, spiritual.

Conversations on a Homecoming, A Whistle in the Dark and Famine are set between 1846 and the 1970s. They do not form a trilogy, but a contrasting, complementary unit. And all lack the mood of cosy detachment that often accompanies period pieces: they feel urgent and visceral.

Conversations on a Homecoming, the most recent in writing and setting, takes place in the west of Ireland, inside a backwater pub. Village clocks strike at different times; wallpaper is peeling and stained; a pretty barmaid – Anne – gazes gravely into space. Old pals congregate in honour of Michael, an actor, “home” from New York. Little happens – just dialogue and booze through a fug of nicotine. Nothing is resolved. But life – life that you can touch and smell – emerges through the fug.

Tom, a schoolteacher who wanted to be a writer, niggles at Michael’s idealistic pretensions. Tom has never left Ireland. He is belligerent, barbed, but brilliant. Michael’s dreams look flimsy; stardom has eluded him; he borrows money from his mum. Tom and Michael joust while Junior sits in between, a decent, hulking man, dogged with worry about his next pint. Liam drinks slightly apart – semi-aloof, semi-outcast – a tawdry capitalist, half-scorned by his peers. The future is his, they think.

Murphy exposes the anguished concerns of people whose self-respect has been stunted. The dialogue deals chiefly in disappointment. But this is not a gloomy piece. Humiliation is tempered by humour, poignancy, affection, singing.

The playwright is unsparing with his characters, yet compassionate – no arch-villains, no lost causes. Miraculously, we side with them all.

A Whistle in the Dark takes place in Coventry in 1960. Britain is riddled with anti-Irish prejudice – “Paddy” jokes are the least of it. Michael Carney, an Irish immigrant, lives with his English wife, Betty. His father and four brothers come to stay. Michael wants to fit in with his adopted society; the Carney brawlers want to fight everyone.

Conflict centres on a street battle proposed between the Carneys and another feral Irish family. Michael won’t fight and he begs his brothers not to. They call him a coward – “a mangy dog” – which, maybe, he is. It is a play about male posturing and paranoia, prestige, tribalism and pathetic inadequacy. It is entirely compelling. Savagery is interlaced with bathos and music. Father – “Dada” – threatens to thrash his grown-up son; later he’s drinking lonesomely, singing, boasting of his great intelligence – “I’m reading the history of ancient Greece.”

Again, the ensemble is very good. Aaron Monaghan is superb as Harry, one of the brothers – brutal, boiling, hurt. Niall Buggy’s “Dada” is an astounding display of bombastic ferocity mixed with lonely terror.

Famine is the biggest of these plays, in scale and subject matter. It portrays the most emotive event in Ireland’s history, when the potatoes failed and the people had to choose between starving and boarding a ship bound for the New World. Murphy never moralises.

Imagery is stylised: tableaux of emaciated figures against jagged, corrugated iron; a ragged child crouched beneath the politicians’ table. Muscular brushstrokes are punctuated with intimacy, lyricism, hope. The mood dips and darts: a waif-like girl is kissed for the first time: a justice of the peace is shot, then kicked viciously by the crippled Mickeleen – “slaves can be tyrants too”. It proceeds to the most harrowing and beautiful climax I have seen on stage.

I can find no weak links in Druid’s production. The cast is talented; Francis O’Connor’s designs are unobtrusively stylish; and Garry Hynes directs with wisdom and feeling.

Themes of emigration? “Universal themes” would be truer. Murphy is, I suspect, the greatest dramatist writing in English. After nine hours in Hampstead, it was hard not to think so.