Getting To Know You: Hann...

Getting To Know You: Hannah Gibbs, Wardrobe Mistress 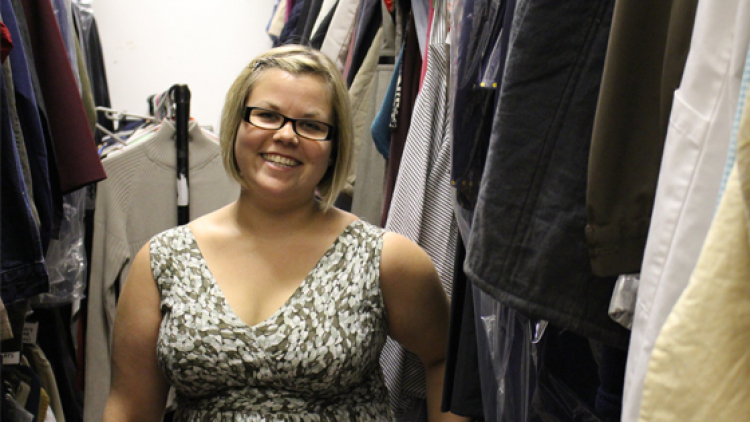 We chat to Hannah Gibbs to find out what a day in the life of a Wardrobe Mistress involves, from sweaty costumes and sewing to live streaming and John Sessions’ broken fly.

I’ve only been here 6 months, feels like home already though.

I come in, do lots of washing and ironing, do any sewing repairs that may be needed, set the costumes out, dress my actors then collect in the costumes at the end.

I love hearing the instant reaction of an audience during a show and getting to work with costumes and actors. I was taken to the theatre a lot as a child, so my love for it has always been there.

I trained in Costume Design & Construction at Queen Margaret University in Edinburgh. When I graduated, it was sheer hard work getting to where I am now, starting at the bottom with unpaid jobs in little fringe venues.

Getting to work with such a range of people all with different talents and sense of humours; it’s really quite inspiring.

Probably the sweaty costumes at the end of a show; that bit will never be pleasant.

I’d say the evening we did the live streaming of #aiww: The Arrest of Ai Weiwei. It was really exciting seeing the show, the live Tweets, the instant feedback and knowing that Ai Weiwei himself was watching.

More of a bizarre/surreal moment than funny would be Longing’s John Sessions racing down the corridor to me with a broken fly during the half; I had to kneel down in front of him and stitch him into his trousers at his crotch – my job is definitely never dull.

Oooh, that’s a difficult one. I’ve enjoyed all the shows I’ve worked on here, but due to being backstage, I don’t get to watch them. The only one I have actually seen is the live stream of #aiww: The Arrest of Ai Weiwei, so I’ll go with that one.

It would probably be at school. We did the Mystery plays, I helped with the costumes, but also wanted a part in the play, so knowing I’m not much of an actress, I got cast as ‘The Tree of Life’ and had to stand there holding out an apple. My drama teacher told me I was the best tree she had ever seen!

And finally, any backstage gossip?

Oh yes, lots, but a Wardrobe Mistress never tells; one of the biggest parts to my job is to keep a secret.