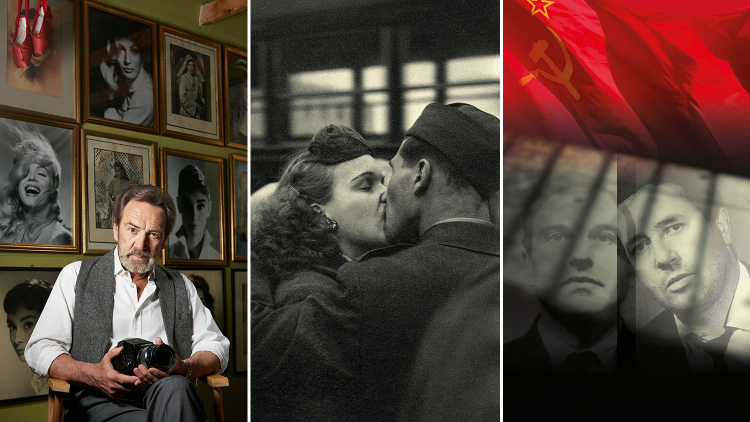 ‘I’m extremely proud to announce such an exciting body of work at Hampstead Theatre this autumn. With two world premieres on the Main Stage, Terry Johnson’s Prism and Nicholas Wright’s adaptation of The Slaves of Solitude, and a long overdue revival of Simon Gray’s Cell Mates, our aim is to continue to provide endless nights of top quality and entertaining theatre for hundreds of thousands of theatregoers. I’m personally looking forward to Gray’s gripping espionage thriller and I hope to help it gain its rightful place in the repertoire as a serious, brilliant piece of British drama.

I’m also proud to introduce ‘Inspire: The Next Playwright Programme’, where 18 – 25 years olds have the opportunity to be mentored by Roy Williams for a year, developing their writing skills and script ideas. We also hope our new membership scheme for under 30s will provide even better access to our cheaper tickets across both of our auditoria. This scheme will offer priority booking ensuring that great theatre remains accessible to the next generation and is an expression of our commitment at Hampstead Theatre to audiences of the future.’

‘The first time I held a prism and turned it to the light it did what the Impressionists struggled a lifetime to do; it embraced the light, split the light; it seemed to understand the very secret of light.'

Hampstead Theatre presents the world premiere of Terry Johnson’s delightfully witty and poignant new play Prism, based on the extraordinary life of double Oscar-winning cinematic master Jack Cardiff. Robert Lindsay returns to Hampstead Theatre (How I Got That Story, 1981) as Jack, ‘the man who made women look beautiful’, and will be joined by Claire Skinner, Rebecca Night and Barnaby Kay.

Terry Johnson returns to Hampstead following his sell-out hit Hysteria starring Antony Sher and Ken (Hampstead Downstairs). His writing and directing theatre credits in the West End and on Broadway include Mrs Henderson Presents, The Duck House, End of The Rainbow, The Prisoner of Second Avenue, The Rise and Fall of Little Voice, La Cage Aux Folles, Rain Man, Whipping It Up, One Flew Over the Cuckoo’s Nest, Hitchcock Blonde, Entertaining Mr Sloane, The Graduate, Dead Funny, Hysteria, Elton John’s Glasses and The Memory of Water. Further theatre credits include revivals of Oh What a Lovely War and Fings Ain’t What They Used T’Be as part of the 50th Anniversary of Joan Littlewood’s legendary Theatre Workshop at Theatre Royal Stratford East in 2014, Cleo, Camping, Emmanuelle and Dick, The London Cuckolds and Sparkleshark at the National Theatre, Lost Land and The Libertine (which was nominated for five Jeff Awards, including Best Production) at the Steppenwolf Theatre, Chicago. He is a former Literary Associate at the Royal Court Theatre where he has had five of his own plays produced: Insignificance, Cries From The Mammal House, Hysteria, Hitchcock Blonde, and Piano/Forte, and has directed two further premieres including Joe Penhall’s Dumb Show. His television credits include Not Only But Always (Channel 4, which won five International Award nominations, Best Film at Banff and the Best Actor Bafta for Rhys Ifans), The Man Who Lost His Head and Cor Blimey! (ITV), The Bite (BBC). His film Way Upstream was chosen for the London Film Festival and Insignificance was the official British Entry at Cannes in 1985.

Claire Skinner plays Nicola. She made her Hampstead Theatre debut last year in Rabbit Hole, Claire most recently starred in The Father at The Wyndhams Theatre, having transferred from The Tricycle. Other notable theatre credits include Blurred Lines, Mrs Affleck, A Winter’s Tale, Othello (National Theatre), Deathtrap (Noel Coward Theatre), Moonlight (Almeida and Comedy Theatre), Measure for Measure (RSC), The Importance of Being Earnest (The Aldwych) and The Glass Menagerie (Donmar / Comedy Theatre), for which she was nominated for an Olivier Award for Best Supporting Actress and won both a London Critic’s Circle Award and Time Out Award for Best Actress. Television and film credits include Critical, Outnumbered, Inside No. 9, Silk, Doctor Who, Lark Rise to Candleford, Sense & Sensibility, Homefront, Poirot, Sleepy Hollow, Life is Sweet and Naked.

THE SLAVES OF SOLITUDE

Hampstead Theatre presents the world premiere of Nicholas Wright’s The Slaves of Solitude directed by Jonathan Kent. Adapted from Patrick Hamilton’s much-loved story, this new play weaves a fascinating blend of dark hilarity and melancholy in a story about an improbable heroine in wartime Britain.

1943, Henley-on-Thames. Miss Roach is forced by the war to flee London for the Rosamund Tea Rooms boarding house, which is as grey and lonely as its residents. From the safety of these new quarters, her war now consists of a thousand petty humiliations, of which the most burdensome is sharing her daily life with the unbearable Mr. Thwaites. But a breath of fresh air arrives in the form of a handsome American Lieutenant and things start to look distinctly brighter... Until, that is, a seeming friend moves into the room adjacent to Miss Roach’s, upsetting the precariously balanced ecosystem of the house...

Nicholas Wright returns to Hampstead Theatre following the sell-out hit The Last of the Duchess (Main Stage, 2011) and A Human Being Died That Night (Downstairs, 2013). His other plays include Treetops and One Fine Day (Riverside Studios), The Gorky Brigade (Royal Court), The Crimes of Vautrin (Joint Stock), The Custom of the Country and The Desert Air (RSC), Cressida (Almeida Theatre at the Albery), Rattigan’s Nijinsky (Chichester Festival Theatre), Travelling Light, Mrs. Klein, Vincent in Brixton and The Reporter (National Theatre). He adapted His Dark Materials (National Theatre), and wrote versions of Naked and Lulu (Almeida), John Gabriel Borkman, Three Sisters (National Theatre) and Thérèse Raquin (Chichester Festival Theatre and NT). His adaptation of Pat Barker’s Regeneration was produced in Northampton and on tour in 2014. His opera libretti include The Little Prince (Houston Grand Opera), Man on the Moon (Channel 4) and Marnie (ENO 2017 and New York Metropolitan Opera 2018); television credits include Armistead Maupin’s More Tales of the City (Channel 4) and three episodes of The No.1 Ladies’ Detective Agency (HBO/BBC). He wrote 99 Plays and co-wrote Changing Stages with Richard Eyre.

Patrick Hamilton was born in Hassocks, Sussex in 1904. He and his parents moved a short while later to Hove, where he spent his early years. He published his first novel, Craven House, in 1926 and within a few years had established a wide readership for himself. Despite personal setbacks and an increasing problem with drink, he was still able to write some of his best work. His plays include the thrillers Rope (1929) - on which Alfred Hitchcock's film Rope was based - and Gaslight (1939), also successfully adapted for screen in the same year. There was also an historical drama, The Duke in Darkness (1943). Among his novels are The Midnight Bell (1929), The Siege of Pleasure (1932), The Plains of Cement (1934), a trilogy entitled Twenty Thousand Streets under the Sky (1935), Hangover Square (1941) and The Slaves of Solitude (1947). The Gorse Trilogy is made up of The West Pier, Mr Stimpson and Mr Gorse and Unknown Assailant, which were first published during the 1950s. He died in 1962.

‘Spies betray people. That’s what we do. It becomes a – a habit. Difficult to break – even when it’s not – not strictly necessary’

Hampstead Theatre presents Simon Gray’s deftly funny play Cell Mates which has been unperformed since 1995. Directed by Artistic Director Edward Hall, this absorbing drama explores how personal freedom is an illusion and even friendship must have carefully circumscribed limits in a world where deception is a reflex response.

Simon Gray wrote more than 30 stage plays including Butley, Otherwise Engaged (which both received Evening Standard Award for Best Play), Japes, Michael, Japes Too, Missing Dates (premiered together at Hampstead in 2014 as In the Vale of Health), Close of Play, The Rear Column, Quartermaine’s Terms (winner of 8 Obie Awards), The Common Pursuit, Hidden Laughter, The Late Middle Classes (winner of the Barclay’s Best Play Award), The Old Masters and Little Nell. He is the author of many plays for television and radio, also films, including the 1987 adaptation of J L Carr’s A Month in the Country, and TV films including Running Late, After Pilkington (winner of the Prix Italia) and Emmy Award-winning Unnatural Pursuits. His acclaimed works of non-fiction are An Unnatural Pursuit, How’s That for Telling ’Em, Fat Lady?, Fat Chance, Enter a Fox, The Smoking Diaries, The Year of the Jouncer, The Last Cigarette and Coda. The dramatisation of his Diaries, The Last Cigarette, co-authored with Hugh Whitemore and directed by Richard Eyre, played in the West End in Spring/Summer 2009. In 1990 Simon Gray was awarded the BAFTA Writer’s Award. He was appointed CBE in the 2005 New Year’s Honours for his services to Drama and Literature. He died in 2008. For more information please visit www.simongray.org.uk

'Look what you have to do to make them like you'

Susie, Edwina and Lucy have moved to a new school in a new town. Three very different sisters who will do anything to fit in and yet are desperate to be noticed. But how far will they go to break out of the roles in which they've been cast and will they ever be able to truly change their lives when they're swimming against the tide?

In a pub in South London ‘The Firm’ reunite for the first time in twelve years. Back in their misspent youth they were a notorious criminal gang; these days they’re older, wiser, and their lives have changed beyond recognition. But when an uninvited guest turns up to the party with an intriguing proposition and an explosive secret it’s clear they might be tempted to try their hands at one last job. Will they escape their past unscathed?

Roy Williams’ gripping new play is a tale of growing up, lifelong loyalties and how sometimes, it is possible to choose your own family.