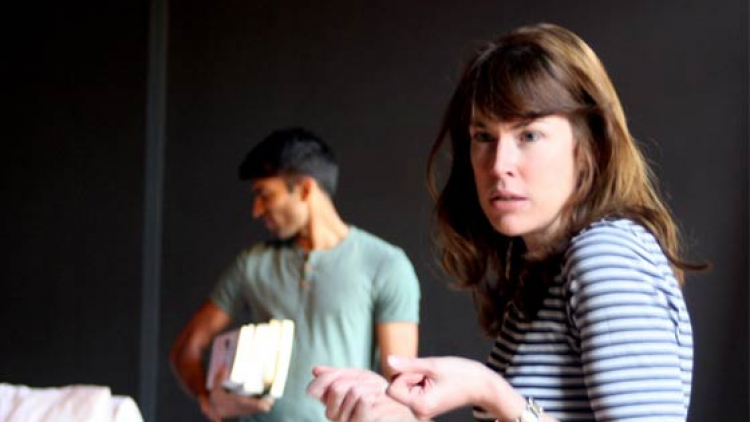 We caught up with Donny’s Brain director Anna Ledwich about rehearsals, her ideal play and the recent Australian take-over of Hampstead Theatre.

Welcome to Hampstead Anna. How are rehearsals going?

Thank you! Rehearsals have been going very well. It’s been a very enjoyable play to work on despite (or perhaps because of) the subject matter. The cast are delightful and very passionate about the play. I hope that translates in performance.

You’ve just moved from a rehearsal studio into Hampstead Downstairs itself – how are you finding it? What do you make of Andrew’s design?

Andrew’s design is beautiful – elegant, simple, metaphorical. The triumph is the ceiling he has designed. The Downstairs space is not big, so it’s quite a bold step to reduce it even further by introducing a ceiling. But it becomes very immersive – it places the audience right at the heart of the action.

You’ve chosen to stage the play in a traverse lay out. What are the constraints of the Downstairs space? And what are the opportunities?

Obviously the size – it’s very small with limited height, width, etc. But I’m a big believer in matching a play to a space. The slight claustrophobia is a useful quality for this play – it lends a voyeuristic element to the production. That’s why we chose traverse – it offers a dynamic playing space for the actors, and the audience are right there with them.

How have the cast been to work with? What can an audience expect from them?

Part of the pleasure of this job is working with actors at the top of their game – each day they surprise me with their inventiveness, skill and courage. And they’re all great company – rehearsing a play can be intense, like being trapped on a boat so you want your co-passengers to be hard working and good company. The audience can expect a bright, witty and emotionally honest group of performances. I’m really proud of them.

What attracted you to working on Donny’s Brain?

The writing. It was such a relief to read a new piece that was intelligent, philosophical, emotionally honest and funny! I knew it would be a great actor’s piece so I’ve tried to keep out of the way of that as much as possible.

Brain trauma is obviously a sensitive subject – what preparation and research have you engaged in for Donny’s Brain?

Reading texts that Rona used as part of her research – knotty and sometimes baffling – but it helped in accessing the characters own bewilderment and fear in the face of enormous ambiguity DESPITE all of the scientific research and theorising.

You trained originally as an actress – what’s it like directing, rather than being directed?

Happily I have no desire to get up there and do it so there is no latent frustration. I prefer sitting outside of it. I enjoy facilitating the actors process, I enjoy collaborating with the other creatives in putting the production together. It suits my personality much better.

What has been your career highlight so far?

I recently directed Blue Remembered Hills at Chichester Festival Theatre in a temporary theatre space – it was part barn, part installation, part open air as the audience were treated to a backdrop of beautiful parkland. The actors playing the children could be viewed running around in the open air, like a widescreen film. It was beautiful.

What would be your ideal play to direct?

We’ve recently had Australians Tom Holloway, Neil Armfield and Dale Ferguson working at Hampstead. What do the Aussies bring that the British don’t?

Irreverence perhaps. A common language and cultural history, yet a sense of detachment from the burdens that history can sometimes impose. Australians carry an interior landscape with them born of having grown up in a country that has vast skies and endless horizons. I don’t know what specifically that brings to the table but it’s something I notice about myself.

What do you miss most about Australia now you’re living in the UK?

I’ve lived in the UK for 14 years so I’m pretty well assimilated now. But I have to say when the damp winters hit or when we experience a wet summer I do look at the heavens and think ‘why??’.